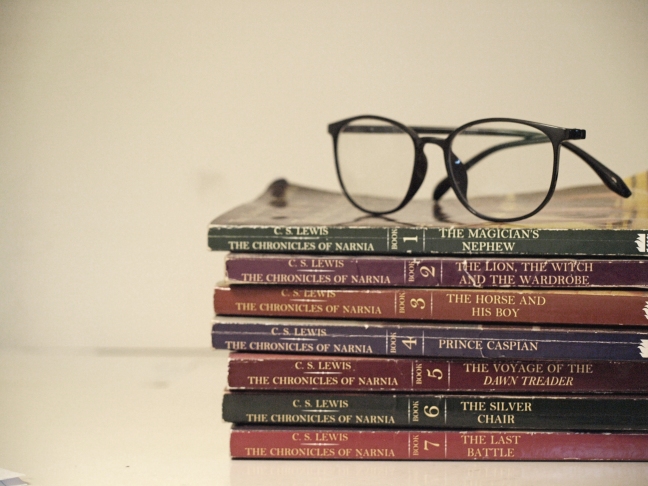 “I can’t see anything,” said Peter after he had stared his eyes sore. “Can you, Susan?”

“No, of course I can’t,” snapped Susan. “Because there isn’t anything to see. She’s been dreaming.”[i]

But Susan later admits she did believe Lucy (even though Aslan was invisible to her). She chose to douse the faith in her heart by rationalizing.

If my eyeballs can’t see Aslan, then Aslan can’t be standing at the trees’ edge, pawing for us to follow.

Reality ended where her sight did.

Susan reminds me of us— rational, reality-rooted humans who seal our trust in what’s visible. This world appeals to our senses. It’s what we breathe and feel and hear and walk around inside.

But for those who believe in Jesus—who follow the Lion, reality explodes beyond all that.

There’s a New Testament character with a blindness like Susan’s.

Nicodemus was a Pharisee and a ruler of the Jews when Jesus was wreaking confusion on Jerusalem (Jn. 2). Other members of the Sanhedrin spat at Jesus’s name.

But Nicodemus was intrigued.

This man came to Jesus by night and said to him, “Rabbi, we know that you are a teacher come from God, for no one can do these signs that you do unless God is with him” (Jn. 3:2).

He couldn’t deny what he’d seen— blind men blinking in the sun and water jugs brimming with wine. But the Pharisee’s spiritual sight failed every exam.

Jesus answered him, “Truly, truly, I say to you, unless one is born again he cannot see the kingdom of God.” Nicodemus said to him, “How can a man be born when he is old? Can he enter a second time into his mother’s womb and be born?” (Jn. 3:3-4).

Like Susan, Nicodemus couldn’t fathom what he couldn’t see. A grown man being reborn?

But isn’t God’s redemption plan just that— one no man could have imagined?

Reality for a Christian is outlandishness to the unbeliever (1 Cor. 1:18), because a Christian sees past the visible world. We look at culture and life and creation through a pair of supernatural spectacles.

And we behold the unimaginable. We see eternity— which, for us, is reality.

“Imaginative” is an attribute we usually give to the preschoolers in the sandbox. But didn’t Jesus call us to something similar?

Truly, I say to you, unless you turn and become like children, you will not enter the kingdom of heaven (Matt. 18:3).

It takes the purity of a child to see our Father for who he is and imagination to see the coming kingdom for what it will be. A Christian, then, should be more imaginative and childlike than anyone else.

A Christian should be more imaginative and childlike than anyone else.

“Imagination is a serious business,” writes Jonathan Rogers, “It gives substance to our yearnings for something beyond ourselves. Imagination is what convinces us that there’s more to the world than meets the eye. And isn’t that the first principle of faith?”[iii]

Lucy Pevensie’s childlike faith drew the siblings through the wardrobe. Her helpless trust in Aslan conquered Narnia’s enemies. Aslan rewarded her with eyes to behold a magical reality that Susan couldn’t.

“The very basis of the Christian life is the ability to stand outside this world and see that this isn’t all there is.”[iv]

Spectacles for Our Blindness

Notice it was Aslan who enabled Lucy to stand outside her world and say, “There is more.”

In his commentary on Psalm 119, Christopher Ash writes:

“Our problem is that the city of this age, the transient city, is very visible and tangible, experiential and intrusive with all its claims and idolatry. And therefore, we need our eyes opened to the word of God. For it is only in that word that we can see the unseen world to come, the city with foundations, the kingdom that cannot be shaken.”[v]

The cure to Susan’s, and Nicodemus’s, and our blindness is God’s Word, unveiled.

The unfolding of your words gives light; it imparts understanding to the simple (Ps. 119:130).

Only in Scripture do we see truth that’s not visible— the glorious kingdom of Christ that lies just behind what our flesh can behold.

God’s Spirit breathes through his Word and breaks through our blinders. That’s when we really live.

Ask for Eyes to Behold

Without the Word, we’ll wallow in doubts like Susan’s and Nicodemus’s. We’ll cling to what we can see. We won’t be able to fathom the glorious reality of a glorious God.

And, “that the God of our Lord Jesus Christ, the Father of glory, may give you the Spirit of wisdom and of revelation in the knowledge of him, having the eyes of your heart enlightened, that you may know what is the hope to which he has called you… (Eph. 1:17-18)

[iv] Rogers, The World According to Narnia, xv

4 thoughts on “A Pevensie, a Pharisee, and the Imagination to See Reality”

I’m Bethany J., and this is my journal, because experts in the craft tell me to “write what you know.”

I’ve written things since I was a little girl in braids and rubber boots, but it wasn’t always about what I knew.

It’s taken years for me to come full-circle, back to the front porches on Edgewood Road. God is working into me a love for place and an ambition that’s quieter, that minds its own affairs and works with its hands (1 Thess. 4:11).