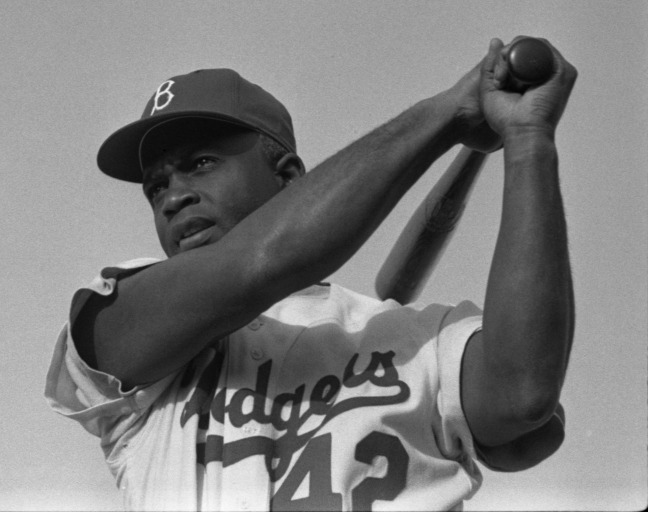 The name and number are ones that roll easily off the lips of any hardcore baseball fanatic. This 20th century shortstop swung a bat that wrought wins and circled the bases with what seemed like supernatural speed.

But Jackie Robinson, proficiency personified, was stalked and preyed by a single fact. He was African-American. The racial hostility infiltrating life at the height of his career proved to deeply affect this man’s work, both on and off the baseball diamond.

When Jackie stepped into the batter’s box to threaten the imposing racial barrier, unthinkable curses and physical threats collaborated against him in one place. Even his own teammates avoided him in the clubhouse and on the field, swearing they would never allow a black man—no matter how talented—to share in their unity as a team.

But all of this was expected. When Mr. Branch Rickey, the president of the Brooklyn Dodgers organization, made the incredibly unpopular decision to sign an African-American to his team, he knew that no ordinary man could fill this role. Rickey foresaw the road that an African-American baseball player would have to walk, and he knew it wasn’t going to be painless.

So Mr. Rickey provoked Jackie Robinson with probable scenarios, forcing the young player to answer the question: What will you do in response?

“Mr. Rickey, do you want a player who’s afraid to fight back?” Jackie asked.

The time had come for the president to make his point… He wanted a player who had the guts not to fight back.

It took more than a handful of baseball games for Jackie Robinson’s meekness to make a breakthrough. Fans, players, coaches, and teammates started to take him seriously when he stood silently in the face of their constant mistreatment and continued to play the game with proficiency.

Mr. Rickey had acted wisely. The only way to slice such a massive piece out of the racial barrier was to give African-Americans an icon who didn’t back down from the insults and who didn’t swing his fists in retaliation.

As Christians, Jesus Christ is looking for this same spirit within us. Actually, he takes it one step further.

You have heard that it was said, ‘An eye for an eye and a tooth for a tooth.’ But I say to you, Do not resist the one who is evil. But if anyone slaps you on the right cheek, turn to him the other also. And if anyone would sue you and take your tunic, let him have your cloak as well. And if anyone forces you to go one mile, go with him two miles. (Matt. 5:38-41)

Mr. Rickey gave Jackie Robinson one command: Don’t fight back. Jesus instructs us—his followers— to not only put our fists away, but to reach out with love and forgiveness.

When Jesus taught about retaliation on the Mount, he knew that it wouldn’t be long before he was struck, stripped of his cloak, and given the burden of the cross to carry. Jesus not only bore these atrocities, he endured them willingly because of his love for us: his enemies.

“Vengeance is Mine, I will Repay.”

The fact that Christ has taken our lust for vengeance upon himself is utterly freeing. It’s freeing to stand and not have to retaliate. But that doesn’t mean it’s easy. Like Mr. Branch Rickey, when God made a way for us to become Christians, he told us what to expect.

Indeed, all who desire to live a godly life in Christ Jesus will be persecuted (2 Tim. 3:12).

Just as the path of the first African-American Major Leaguer was riddled with oppression, so is that of a Christian. We are a misunderstood, mocked, mistreated, and often martyred people. And in all of this, we are called to persevere by sacrificing our cloak, walking with our enemy another mile, and offering our cheek to the insulter who would slap it.

Jackie Robinson’s abstinence from retaliation was in part what finally abolished the color barrier on the baseball field and earned him the legacy he holds today.

Let us live with such an impact by not only refusing to fight, but choosing to forgive with love.

You have heard that it was said, ‘You shall love your neighbor and hate your enemy.’ But I say to you, Love your enemies and pray for those who persecute you, so that you may be sons of your Father who is in heaven (Matt. 5: 43-45a).

5 thoughts on “Jackie Robinson and Jesus Christ: To Fight or To Forgive?”

I live in a brick home on a road called Edgewood, where I try to write like Jo March, garden like Beatrix Potter, and go on Tookish-Baggins adventures.

This blog is where I look carefully at God’s Word and world.

I pray Jesus shines through my words, as lamplight coloring the windows of our true Home. I hope you’re warmed and welcomed here.