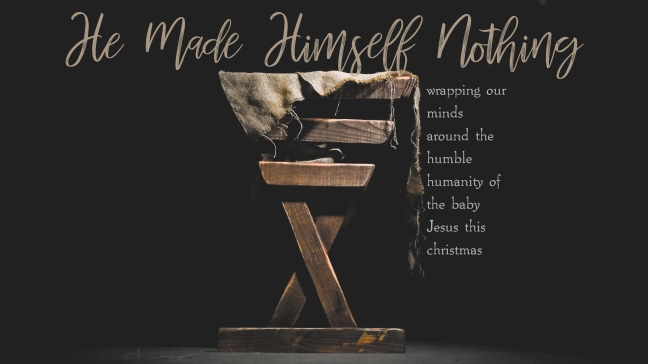 “In the sixth month the angel Gabriel was sent from God to a city of Galilee named Nazareth, to a virgin betrothed to a man whose name was Joseph, of the house of David. And the virgin’s name was Mary.” (Luke 1:26-27 ESV)

Nazareth. Can anything good come out of Nazareth? (John 1:46)

Settled in the hill country of lower Galilee, this small village did not enjoy a place of prominence during Jesus’ time, and instead possessed quite a negative reputation. The Nazarenes were viewed by outsiders as unpolished, lacking in culture and morals, and irreligious.[i]

We see a bit of this ignorance played out in Mark 6 when the adult Jesus returned to his fellow townspeople only to be questioned, doubted, and rejected. In fact, the Nazarenes’ lack of faith was so blatant that Jesus himself marveled at it! (Mark 6:6)

Disreputable, doubtful, and indifferent, Nazareth was a town where few chose to dwell and even fewer chose to visit.

But does God choose that which is approved by man?

No. He chose Nazareth, and he chose a virgin from Nazareth to carry the seed of salvation for his people.

Born Of A Virgin

For a Nazarene girl to conceive a child outside of marriage was a double indignity I cannot fathom. Yet Mary is one of the few women in the ancient world whose life story is told from girl to woman. Clearly, God saw her as more important than her humble title of simply a Nazarene virgin.

It was the world’s items of disregard that God used to bring about his Son. Mary was one of these tools and she recognized that. Her song of praise (the Magnificat) attests to this.

God has been mindful of me, Mary says. God could have found a rich, noble, powerful queen who lived in a palace. But he has chosen not to do so. He’s come instead to a lowly girl who has no apparent significance whatsoever. He’s come to me. …I may be very little in the eyes of the world, but I am valuable in the eyes of the One who made the world. [ii]

And that is all that matters.

The only thing that truly mattered to Mary was her service to the God Whom she worshipped and now, Whom she bore. He had chosen an unmarried Nazarene girl to birth the Most High God.

An Incarnation of Disgraceful Glory

God’s ways are not our own. The whole of the Christmas story conveys this message. From Nazareth to virgin to Bethlehem to manger, the plan for the entrance of the Son of God into the world screams disgrace and confusion.

Why this? For a king? For God?

Jesus was not born into the palace of an earthly dynasty. He did not grow up as one set apart from peasants to be Prince.

Jesus became a peasant. He made himself nothing. He took the form of a servant. He did what was necessary to achieve intimacy with us… humble humanity.

God used ‘Nazareth the disreputable’ and ‘Mary the disregarded’ to bring about the climax of the story he had been writing since the birth of time.

We now progress further into this unfolding drama, God’s people holding their breath in suspense for the moment when the Savior of the line of David will make his appearance.

The embryonic form of Deity swells within Mary.

What other instruments of lowliness will God use to bring about the incarnation of his glorious Son?

I’m Bethany J., and this is my journal, because experts in the craft tell me to “write what you know.”

I’ve written things since I was a little girl in braids and rubber boots, but it wasn’t always about what I knew.

It’s taken years for me to come full-circle, back to the front porches on Edgewood Road. God is working into me a love for place and an ambition that’s quieter, that minds its own affairs and works with its hands (1 Thess. 4:11).